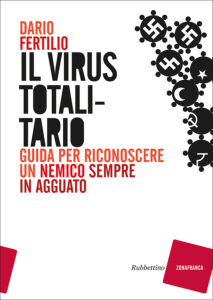 Dario Fertilio’s Il Virus totalitario. Guida per riconoscere un nemico sempre in agguato (Rubettino, 2017), (The Totalitarian virus. A guide to Recognize an Ever-Lurking Enemy). describes an articulated and well detailed “autopsy” of the totalitarian system, using the organic and information technology analogy of the “virus.” The work is divided into four parts and the individual chapters are held together by a systematic plant that the author himself defines: “organic viral model.” In short, Fertilio’s piece argues the infection of the totalitarian virus is the result of an encounter between enzymes and the target cells. In the absence of cellular vehicles, says Mr. Fertilio, the virus cannot replicate and spread throughout the body, or government, and prevent totalitarian government.

Among the many topics discussed in the volume, one thesis from Mr. Fertilio argues the characteristics of the general problem, which claims “To affirm that totalitarianism either is historical or it isn’t, it is to ignore the general characteristics of a disease.” In practice, the author challenges the interpretation that reduces totalitarianism to its historical expressions and it ends to identify it with the “States and its institutions,” “insignia and armies,” “supreme leaders and economic techniques,” “propaganda methods,” and “diplomatic-military strategies.” According to Fertilio, the reduction of totalitarianism to its insignia denounces a serious lack of theoretical perspective and ability to grasp the phenomenon as a whole.

What are the presuppositions, even theoretical ones, that favor the spread of the totalitarian virus and how can one try to defend themselves? The problem posed by Fertilio tells us in the first place that there is no epoch of history and a geopolitical area entirely protected from totalitarian infection. In practice, democracy and freedom, with all their defects and limits, are not irreversible acquisitions of history and the exclusive prerogatives of some ethnic, national, religious or cultural groups. We are all exposed to infection and we should always keep our guard up.
A fundamental point to understand how to defend from the virus of totalitarianism is to consider the relationship between the general conditions of a society and its vulnerability. In practice, writes Fertilio, “there are recognizable social and political conditions, which we can define as pre-totalitarian, which can function as watchtowers, and resonate like alarm bells.”

I believe, in the wake of the Italian political scientist Luigi Sturzo, who has dedicated numerous pages of his sociological and political work on the subject of totalitarianism, that the “monistic” principle can be used as an alarm bell. According to this principle, the irreducible social pluralism would be denied. To express this concept, Sturzo used the expression “plurarchy” (plurarchia), while for Alexis de Tocqueville we could consider the expression “principle of association.” The great merit of the social pluralism that nurtures is nourished in by principles of “plurarchy” and association, and therefore by the participation of people in civil life. On the one hand, it promotes an ever-closer relationship between the social sphere and the political sphere, which does not fade the principle of popular sovereignty in the mists that separate the rulers from the governed. On the other, it allows the identification of public spaces in which people can form an opinion and express it, trying to counteract the formation of conformism, typical of mass societies and all this is in itself a strengthening of the “electoral democracy.” To put it in the words of Etienne de la Boétie in his Politics of Obedience. The Discourse of Voluntary Servitude: “Only be resolved to serve no more, and you will be free!”

Ultimately, to Fertilio, antidote par excellence is always the same, namely: “Ability to direct military intervention, global increase in wealth and its spread, affirmation of a culture of liberties in all areas, legal certainty and alliance of global democracies must have the task of restricting the field of action of the virus, taking away from it the burning material of which it has a vital need. The virus must be starved.” (p.210).